Erase And Reborn The Humanity
2012, Metal Scrap Records.
Sectorial is a band hailing from the Ukraine that has released 3 EP's previously. I cannot comment on how those sounded since I never even heard of the band until I got this album in my hands.
So according to the band they play some sort of thrash/grindcore mix, now does this hold true?
The bands starts out as expected as a very grindcore band. Simple riffs but very heavy. But here they are being song with a thrasy voice. Nothing to unexpected, but on closer examination one suddenly finds black metal influences and even pagan instruments. While this sounds like a strange mix (and it definitely is), it can be a great plus for people searching for something new.
The song 'Too Much?' has a pan-flute in it, that is indeed a bit to much for a song that for the rest is just like any other random grindcore song. But balls for trying guys, balls.
The songs are all pretty short, keeping in the grindcore tradition even-though there are a few exceptions like 'Stolen World' and ' Before the Silence Comes" that latter one even including bird chirping and more flute-action (not the kind that you see in a dirty movie though). 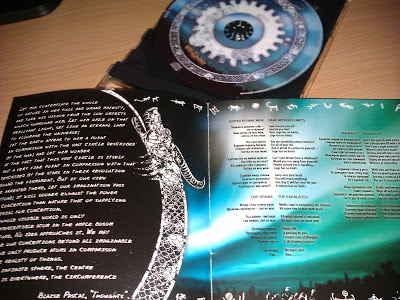 The booklet is pretty well done, with all lyrics being both in Ukrainian and English next to each other, it also starts with and text from Plaise Pascal (thoughts), which is a very interesting way to engage your listener to your themes. Here most songs are about that you need to wake up and stop taking everything for granted.
If you like your grindcore to be just that tad bit more, that tad bit more experimental check it out. I for one did not like the more alternative bits like 'Before The Silence Comes' but I still liked the more traditional parts pretty well.
Посилання: http://progressiveviolence.blogspot.be/2012/10/sectorial-erase-and-reborn-humanity.html